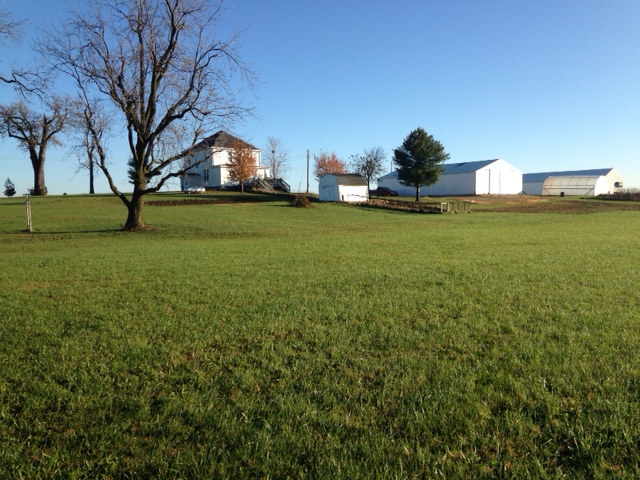 Every fall for the past ten years I have directed the fall play at the school where I teach, the same school where I grew up.  The two months of fall play are always hard on both me and Audra, but this year was particularly difficult now that we have so much more to take care of (both farm and child being included in the “more”).  When the show ended its run last weekend, I was quickly reminded of all the things that needed done around here now that I was home before 10:00 PM for the first time in nearly two weeks.  To commemorate our efforts together on and off stage, my students got me a personalized hat with a nickname that many of my play kids have called me for years now.

There is probably a name for this type of hat, but I’m not hip enough to even know that.  I’m not sure I can pull off this look while weeding the fields next year.  My wide-brim straw hat that I usually wear out there is probably an even tougher look to pull off, so who knows, stranger things have happened on this hilltop.  If nothing else, it will work great as an egg basket…but something tells me that’s not what they had in mind.

We needed this weekend to be our “catch up” weekend, and we were mostly successful with that goal.  Yesterday I worked most of the afternoon on tearing out beds, lifting out the drip irrigation system, pulling landscape fabric, and creating a mountain of dead plants that I hope to eventually turn into an actual compost heap.  Right now it’s far from that.

Today I got up early to get out there for a while before my son got out of bed.  I was greeted with the first truly hard frost of the year, which was a little depressing, but also a needed reminder that all these beginnings really do need ends.  The remaining flowers in our fields which had survived the previous sissy frosts are officially out of commission.

In the hoop house, though, our sweet peas and anemones are growing strong and loving the cool weather.  Now that we put rabbit fencing up around the hoop house they might actually have a fighting chance.

Audra got up early as well to work on some of the many freelance design and photography gigs she’s been fortunate enough to have over the past few months.  From there she transitioned to putting the finishing touches on the fifty-some page business plan she’s been working on for three months.  She probably changed a few diapers in there too.  She’s a remarkably talented gal, that Audra.

And in the midst of all this, we also managed to put the finishing touches on our upcoming presentation that we’ll be giving at the Local Food Summit.  Life right now is a strange mix of wrapping up this year, looking towards next year, and waiting to see when this whole “down time” thing is supposed to show up.  We’re all wearing a lot of different hats around here.  Some days that fact is mighty frustrating.  But tonight I’m going to bed with embarrassingly sore muscles and dirt beneath my fingernails.  I can’t ask for much more out of a weekend than that.

Spots are still open for our 2016 Flower CSA, which includes a flower-arranging class out here at the farm.  Go here if you want to learn more.