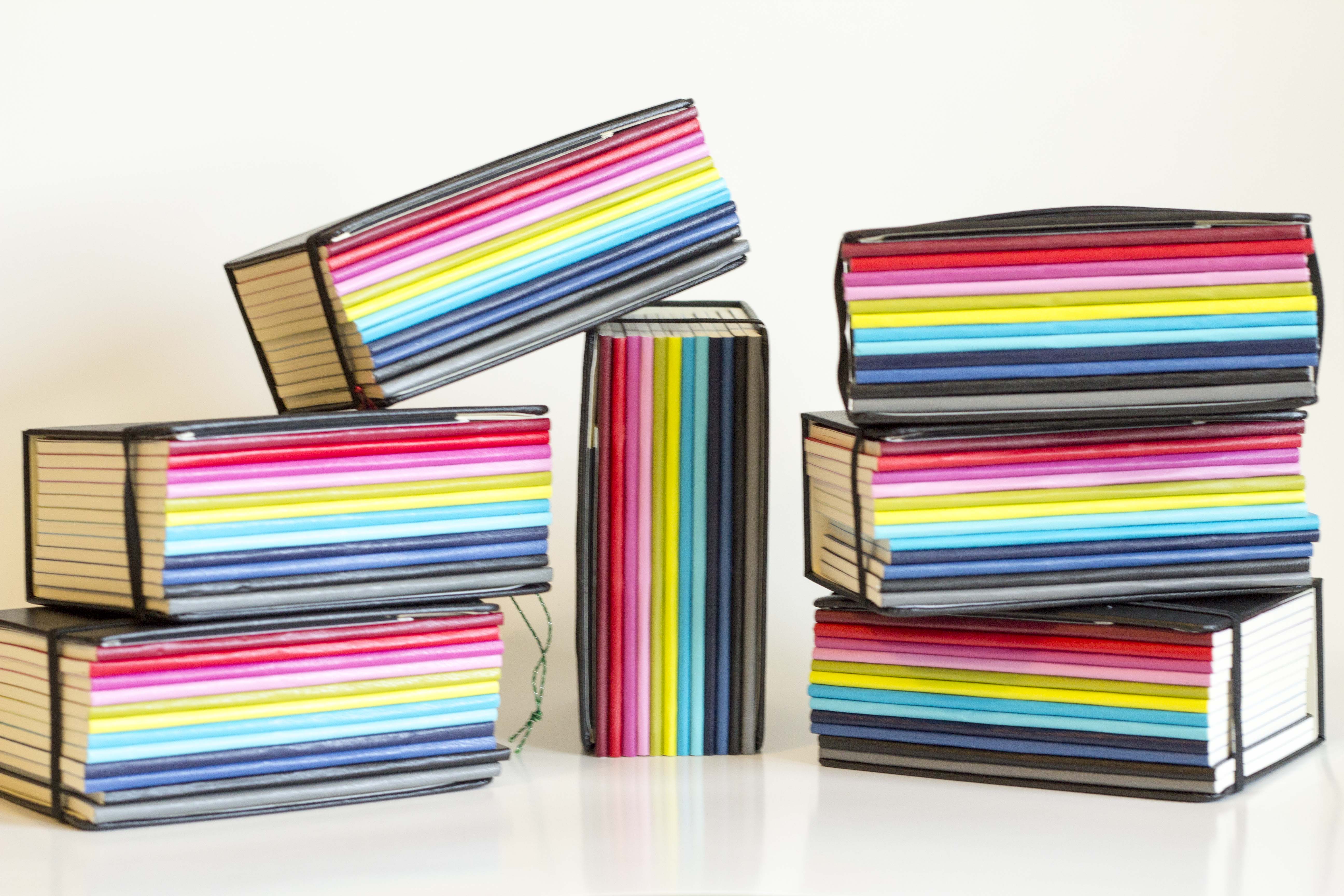 I have kept a journal for the past seven years. By journal, I mean I have written a sentence about each day, every day for seven years. I always kept some sort of diary or journal when I was a kid. I stopped when I went to college and for years after college I didn’t write.

In 2009, on New Year’s Eve, Chris and I were meandering through a going out of business Borders bookstore and I found a half-opened Moleskin Color a Month Daily Planner shoved behind some books for 75% off and decided it was going to be a New Year’s resolution to start journaling again.

I decided to keep it simple. Write only one to two sentences per day, each day, no matter what. The sentences could be good or they could be bad. Didn’t matter, as long as I wrote. Somehow this habit has stuck with me.

Each month has its own book. That book goes with me if I stay the night somewhere and sits on my night stand each night waiting for me. When a new month comes, the old month’s book goes back in with the other journals and a fresh new journal is cracked open.

I recently dragged out all of my journals for the past seven years and read through them. I can’t believe some of the things I forgot. I’m thankful for my past self for capturing memories that I thought were long gone.

I forgot there was a time in our lives (before Lincoln and farm) where we slept in until 9:30 a.m. on Saturdays, we ate gluttonous amounts of Chinese food, we would have fights in front of family members, and that my mother-in-law drove in the rain to deliver made-from-scratch cinnamon rolls when I was pregnant because it was the only thing that sounded good and I could keep down.

I forgot Chris thought it would be hilarious to name our unborn son, Audro and that he would giggle with glee at my baby bump.

I forgot there was small ephemera from each day tucked into the pages.

Or that after Lincoln was born, a day was considered successful if I didn’t cry. I would later feel more like myself when I saw a Dr. and was candid about how I felt with post-partum depression and was prescribed medicine that helped me through that dark time.

So many joys, so many sorrows captured on paper with ink.

James Pennebaker, a researcher at the University of Texas at Austin has done extensive research that shows writing about our emotions on consecutive days can decrease anxiety and depressive symptoms and boost our immune system. Cheap therapy that actually makes you healthy too? WIN. WIN.

So why am I telling you all of this?

Actually, I’m not really sure. All I know is that a simple New Year’s resolution of writing each day was way more fun than going on a diet to only forget about it three weeks later. A New Year’s resolution gave me a self-made compendium of most of my 20’s and the start of my 30’s. It was fascinating and healing to see what a day in the life of 24 year old Audra was like and I’m thankful that exists.

What New Year’s resolutions have made lasting impressions on you?

I leave you with a conversation between 28 year old Chris and 26 year old Audra on Thursday, November 22, 2012: