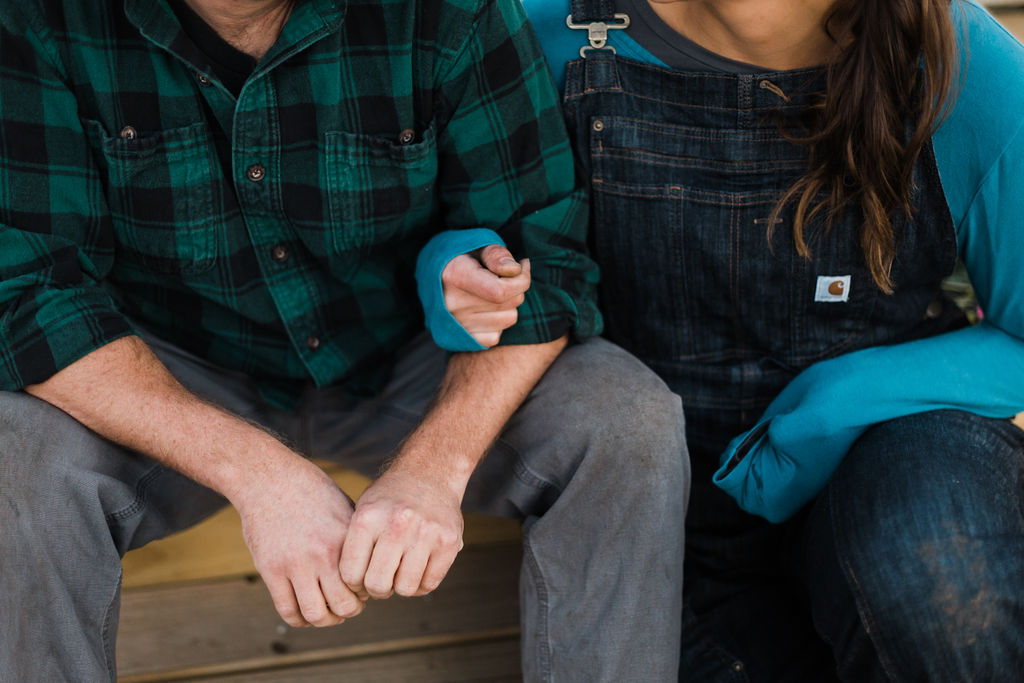 Almost since we started the farm, Audra and I have listened to Chris Blanchard’s “Farmer to Farmer Podcast.” I don’t even remember how we learned about it, but from the first episode I heard, I was hooked. Each episode is essentially Chris interviewing a small-scale grower and learning about their farm and how it fits into their life. The podcasts are engaging, funny, insightful, and uniquely educational for small growers like us. Even a couple of our “farmer friends” were interviewed for the show. Audra and I would occasionally joke that if we ever got our act together, maybe we could be cool enough/successful enough/lucky enough to be interviewed as well. This fall, Chris Blanchard passed away after a long battle with an illness. Though I never met him in person, or even spoke to him in writing, he has left a profound impact on my life. I have listened to his voice in my ear for dozens of hours. As a result, I, like so many other listeners, feel as though I got to know him. This winter I have started to re-listen to some of my favorite Farmer to Farmer podcasts, and while I am still sad when I think about Chris’s untimely death, I continue to feel blessed that he was able to leave behind such a valuable gift to those of us trying to make a living by growing.

At the end of each podcast, Chris would do a “lightning round” where he would ask his guest a series of questions with relatively short answers. I’ve thought about what my answers would be for some of these questions many times, so I thought I would share my responses. I’ll also have Audra answer the same questions without seeing my own responses first.

What is your favorite tool on the farm?

Chris: The first that comes to mind is our BCS two-wheel tractor. It is our single biggest investment for the farm, to date, but it has made our soil preparation so much easier and more effective. We spent multiple seasons creating raised beds one shovelful at a time, and it was remarkably unsustainable. We have a harrow plow, flail mower, and bed shaper for our BCS, and there are literally dozens of other attachments that we could still purchase that would have big impacts on how we farm. So, to use a term that Chris Blanchard loathed, it’s been a real “game changer” on our farm, and I think we’ve only started to see its potential impact.

Audra: The computer. Without it we wouldn’t have our budgets or quickbooks. We wouldn’t actually know what our profit margin is or what our sales projections are for the month. We wouldn’t understand where we are wasting time or money with products or projects. I think it’s the most crucial tool we have. It allows us to edit the photos we take and tell our story through our blog and social media. It connects us with our vendors. We could be the best growers in the world, but if we didn’t have our computer, we couldn’t sell or market our products or understand our finances and we wouldn’t have a functioning farm.

What advice would you give your beginning farmer self?

Chris: I have two things. At times, I wish we had tried to grow more when we still lived in town. If I had known anything about the “urban farming” trend at the time, I think that we could have gotten some much needed experience that would have helped us transition to our farm in the country. Along those same lines, I really wish I had not tried to grow everything those first couple years. We would have been much better off growing a few things and figuring out how to grow them really well. We wasted a lot of time and money on trying to diversify too much in the beginning. I think that choice would have helped us mentally as well. I feel like we lost some confidence those first couple years because we wanted to grow so many different things, but then we ended up growing all of them pretty poorly. Now, I feel like we’re finally growing a few things really, really well, and that feels a whole lot more fulfilling.

Audra: Go easy on yourself. It will all be ok. And save your damn money. You broke a lot off to chew at once. You uprooted your family, started a farm while working full-time and were a mom all at the same time. No one could have done that perfectly and you did the best you could with what you had. And yes, you can create that budget now to have a better nest egg to live off of when the time comes to go to the farm full time. There’s fat in your spending habits, CUT. THE. FAT. NOW.

What is your favorite crop to grow?

Chris: Salanova lettuce. I had only grown a few heads of lettuce prior to starting the farm, and we initially didn’t even consider it as one of our farm crops. Now, we grow 6 of the 8 Salanova varieties, and I’ve figured out how to grow them pretty well for the entire growing season, which I don’t think we can say about anything else that we grow currently. It’s also the tastiest lettuce I’ve ever had, and I’m convinced it’s better than just about anything else you can buy.

Audra: Ranunculus. Their transformation gets me. They start out looking like shriveled up branches that require an elaborate soaking ceremony to morph into alien-like cephlapods that feel weird and slightly gross in your hands. They go into our hoop house in the winter and they are one of four crops going at that point, so I get to really pay attention to how they grow. Each day more green shows and after months of basically watching paint dry, a papery delicate bloom appears with the faintest fragrance.

What is one non-farm thing you’ve enjoyed doing in the past month?

Chris: Since I’m still working full-time off the farm, I have not done a very good job of doing stuff “for me” the past few years. The little time I do have to spare, I feel like I should be spending with my family. However, last month I did go deer hunting for the first time since our son was born, so I was thankful that I took some time to do that. I didn’t get a deer, but that just gives me more reason to get back out there again.

Audra: Going to the movies with our kid. It’s been hard to live and work in the same place, so it was nice to leave the farm and do something fun.

What is Audra’s farming super power?

Chris: Audra has this crazy ability to see something, and then seemingly instantly being able to replicate it, usually making it better in the process. It feels like she can just figure out how to do almost anything. It actually kind of pisses me off sometimes. I feel like I can easily get stuck in this analysis paralysis cycle, but Audra can just get an idea in her head, or look at one picture, and then she’s off to the races. I don’t feel like that’s a skill that I share. We’re lucky that she’s such a fast learner with so many things–it’s helped us to grow the farm much more quickly than we would have been able to otherwise.

Audra: His work ethic. There have been so many times when I physically and emotionally can’t push myself any more and I’ll look at Chris and he doesn’t have that panicked look on his face that I have. He’ll look at me and say something like “we can do it” and pick up a hoe and start at it again and I realize I can keep going. He’s got this knack for being able to work in stupid hot heat and get the damn job done and keep us as a team going too.