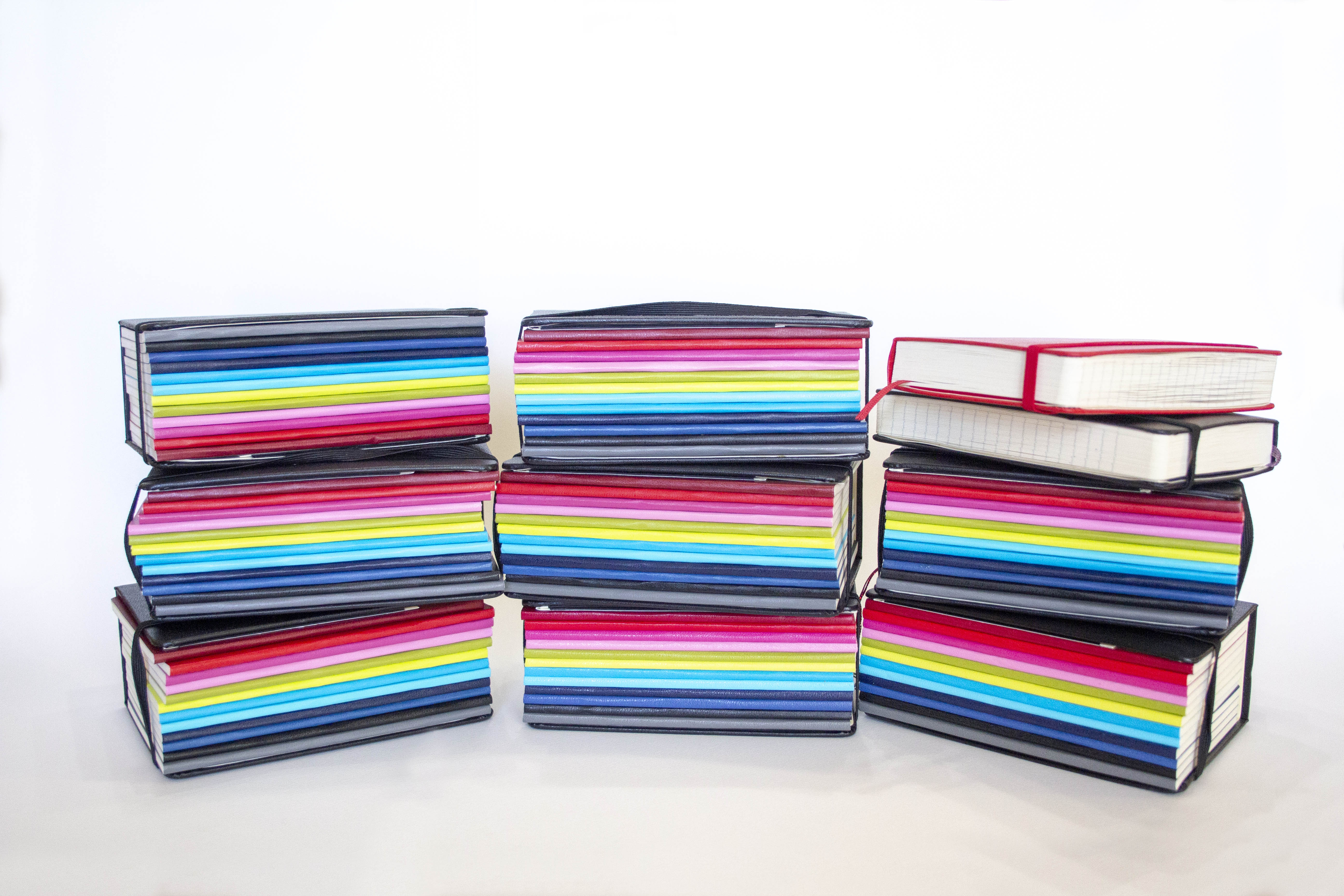 On January 8, 2010, an interesting rainbow made of journals caught my eye in a to-be closing Borders bookstore.

It was a set of 12 Moleskine journals – each month had its own journal/calendar and all the journals were housed in a black cover. Sort of like a warm cardboard hug. It was 50% off and I decided “what the hell” I’ll get it.

Not sure what I’d do with it, I remembered I journaled fairly actively every few weeks from the ages of 11-18. Sometimes it was multiple times a week, sometimes a few months would pass and a new entry would appear. I would write long sappy entries, mainly about just wanting a boyfriend and volleyball, so much volleyball.

The format of my newly acquired journal seem to lend itself to more short-form journaling. “What if I wrote one sentence about everyday?” I asked myself. “That seems doable!” my self responded to myself.

On January 8, 2020 I will have written an entry everyday about my life for ten years. When I started this, I had absolutely no idea I would continue this for ten years. Lincoln will probably find these journals when he’s 62 and I’m 90 and in a nursing home clinging tightly to and talking endlessly about the glory days of my volleyball career. He’ll thumb through a few pages and hopefully thrown them on the burn pile. Lincoln – if you ever find this blog entry, it’s ok – throw the damn journals on the burn pile.

If this project seems self-absorbed or pointless….maybe you’re right OR maybe you’re wrong!? I’m not really sure…. but here’s what this project has shown me: how much I have evolved as a human being. I was 24 when I started this project, newly married, working as a Marketing Assistant in a retirement home, and not too overly concerned about where I would end up in life. The things that were important to me ten years ago are, frankly, laughable now. There are so many moments I have also completely forgotten about and will treasure (thank you past-me). There are small momentos tucked in to some of the pages too. Like a sonogram that showed the growing baby in my belly would be a boy. The Christmas present tag that reads “To: the most beautiful girl in the room | From: the short, hairy guy staring at you”.

It doesn’t feel like a waste to write down feelings, memories, or thoughts. It helped me release them at the end of a day. The words moved through the pen, onto the paper, and went out into the universe. There were a few months heavy with grief where I couldn’t journal about what was happening in my life. But instead, I forced myself to make a list of things I that were good about that day.

About two years ago Moleskine stopped making my journals. In a fit of rage and sadness, I emailed them Moleskine explaining how long I had used them and how dare they stop making them! My email went unanswered. I was forced to look for a new format.

I then switched to this type of journal that houses all the days of the year into one neat little book. I actually like this format better, as much as it pains me to say that. It’s easier to flip back through and takes up far less space.

So here’s how I did this. My journal lives on my nightstand. Before bed each night, it comes out, one sentence about my day is written, and boom I’m done. Over the years, I made it a rule not to talk about work. I wanted to find the good and funny in each day and didn’t want to talk about work which often felt like it was controlling my life. Like previously stated, sometimes I’d be going through something and would just make a list of what was good about that day. Sometimes I’d need to bitch about work and that was okay too. The most important rule was: write something down each damn day and give yourself grace if you don’t. I was surprised at how easily it was to just make this a habit.

It was such a part of my routine, that when my sister-in-law gave me a journal that allows you to do the same for your new baby, it was easy peasy to complete. The first five years of Lincoln’s life are documented. Lincoln – if you’re reading this, you are NOT allowed to throw that journal on the burn pile – that book is FULL of gems.

As we approach this new decade upon us, I encourage you to write your thoughts, feelings, emotions, ideas, concerns, anything you’d like in a book dedicated just to you. Your future self will thank you. As far as my journaling goes, I’m not sure how long I’ll continue writing each day, it sort of feels like a train that’s left the station and may be hard to stop. I do know, my teal 2020 Moleskine calendar is waiting to get cracked open and be filled with the words of 34 year old Audra.